In the Name of Allah, the Most Gracious, the Most Merciful

One of the distinctive characteristics of the times we live in is the overwhelming presence of violence in our societies. Whether it is a bomb going off in a market place, or the hijacking of an aircraft where innocent people are held at ransom to achieve political ends, we live in an age, where the manipulation and loss of innocent lives has become commonplace. Such is the all-pervasive nature of indiscriminate violence, that “terrorism” is considered as one of the prime threats to peace and security in our societies.

The word terrorism came into wide usage only a few decades ago. One of the unfortunate results of this new terminology is that it limits the definition of terrorism to that perpetrated by small groups or individuals. Terrorism, in fact, spans the entire world, and manifests itself in various forms. Its perpetrators do not fit any stereotype.Those who hold human lives cheap, and have the power to expend human lives, appear at different levels in our societies. The frustrated employee who kills his colleagues in cold-blood or the oppressed citizen of an occupied land who vents his anger by blowing up a school bus are terrorists who provoke our anger and revulsion. Ironically however, the politician who uses age-old ethnic animosities between peoples to consolidate his position, the head of state who orders “carpet bombing” of entire cities, the exalted councils that choke millions of civilians to death by wielding the insidious weapon of sanctions, are rarely punished for their crimes against humanity.

It is this narrow definition of terrorism that implicates only individuals and groups, that has caused Muslims to be associated with acts of destruction and terror, and as a result, to become victims of hate, violence and terror themselves. Sometimes the religion of Islam is held responsible for the acts of a handful of Muslims, and often for the acts of non-Muslims!

Could it be possible that Islam, whose light ended the Dark Ages in Europe, now propound the advent of an age of terror? Could a faith that has over 1.2 billion followers the world over, and over 7 million in America, actually advocate the killing and maiming of innocent people? Could Islam, whose name itself stands for “peace” and “submission to God”, encourage its adherents to work for death and destruction?

For too long, have we relied on popular images in the media and in Hollywood films, for answers to these pertinent questions. It is now time to look at the sources of Islam, and its history to determine whether Islam does indeed advocate violence.

“…take not life, which God hath made sacred, except by way of justice and law: thus doth He command you, that ye may learn wisdom.” [Al-Qur’an 6:151]

Islam considers all life forms as sacred. However, the sanctity of human life is accorded a special place. The first and the foremost basic right of a human being is the right to live. The Glorious Qur’an says:

Such is the value of a single human life, that the Qur’an equates the taking of even one human life unjustly, with killing all of humanity. Thus, the Qur’an prohibits homicide in clear terms.The taking of a criminal’s life by the state in order to administer justice is required to uphold the rule of law, and the peace and security of the society. Only a proper and competent court can decide whether an individual has forfeited his right to life by disregarding the right to life and peace of other human beings.

Even in a state of war, Islam enjoins that one deals with the enemy nobly on the battlefield. Islam has drawn a clear line of distinction between the combatants and the non-combatants of the enemy country. As far as the non-combatant population is
concerned such as women, children, the old and the infirm, etc., the instructions of the Prophet are as follows: “Do not kill any old person, any child or any woman” “Do not kill the monks in monasteries” or “Do not kill the people who are sitting in places of worship.” During a war, the Prophet saw the corpse of a woman lying on the ground and observed: “She was not fighting. How then she came to be killed?” Thus non-combatants are guaranteed security of life even if their state is at war with an Islamic state.

While Islam in general is misunderstood in the western world, perhaps no other Islamic term evokes such strong reactions as the word ‘jihad’. The term ‘jihad’ has been much abused, to conjure up bizarre images of violent Muslims, forcing people to submit at the point of the sword. This myth was perpetuated throughout the centuries of mistrust during and after the Crusades. Unfortunately, it survives to this day.

The word Jihad comes from the root word jahada, which means to struggle. So jihad is literally an act of struggling. The Prophet Muhammad (peace be upon him) said that the greatest jihad is to struggle with the insidious suggestions of one’s own soul.Thus jihad primarily refers to the inner struggle of being a person of virtue and submission to God in all aspects of life.

Secondarily, jihad refers to struggle against injustice. Islam, like many other religions, allows for armed selfdefense, or retribution against tyranny, exploitation, and oppression.The Glorious Qur’an says:

Thus Islam enjoins upon its believers to strive utmost, in purifying themselves, as well as in establishing peace and justice in the society. A Muslim can never be at rest when she sees injustice and oppression around her. As Martin Luther King Jr. said: “We will have to repent in this generation not merely for the hateful words and actions of the bad people but for the appalling silence of the good people.”

Islam enjoins upon all Muslims to work actively to maintain the balance in which God created everything. However, regardless of how legitimate the cause may be, the Glorious Qur’an never condones the killing of innocent people.Terrorizing the civilian population can never be termed as jihad and can never be reconciled with the teachings of Islam.

Even Western scholars have repudiated the myth of Muslims coercing others to convert. The great historian De Lacy O’Leary wrote:

“History makes it clear, however, that the legend of fanatical Muslims, sweeping through the world and forcing Islam at the point of sword upon conquered races is one of the most fantastically absurd myths that historians have ever repeated.”

Muslims ruled Spain for roughly 800 years. During this time, and up until they were finally forced out, the nonMuslims there were alive and flourishing. Additionally, Christian and Jewish minorities have survived in the Muslim lands of the Middle East for centuries. Countries such as Egypt, Morocco, Palestine, Lebanon, Syria, and Jordan all have significant Christian and/or Jewish populations. This is not surprising to a Muslim, for his faith prohibits him from forcing others to see his point of view. The Glorious Qur’an says:

“Let there be no compulsion in religion:Truth stands out clear from Error: whoever rejects evil and believes in God hath grasped the most trustworthy handhold, that never breaks.And God heareth and knoweth all things.” [Al-Qur’an 2:256]

Far from being a militant dogma, Islam is a way of life that transcends race and ethnicity. The Glorious Qur’an repeatedly reminds us of our common origin:

“O mankind! We created you from a single (pair) of a male and a female, and made you into nations and tribes, that ye may know each other (not that ye may despise (each other).Verily the most honored of you in the sight of God is (he who is) the most righteous of you.And God has full knowledge and is well acquainted (with all things).” [Al-Qur’an 49:13]

Thus, it is the universality of its teachings that makes Islam the fastest growing religion in the world. In a world full of conflicts and deep schisms between human beings, a world that is threatened with terrorism, perpetrated by individuals and states, Islam is a beacon of light that offers hope for the future. 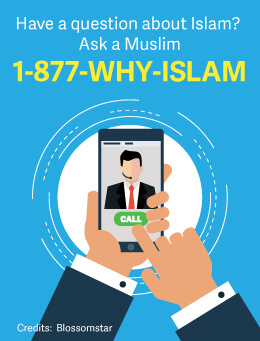